To test the company’s new digital wallet, we head to a Major League Baseball game where the Passbook ticketing system is in place.

To test the company’s new digital wallet, we head to a Major League Baseball game where the Passbook ticketing system is in place. 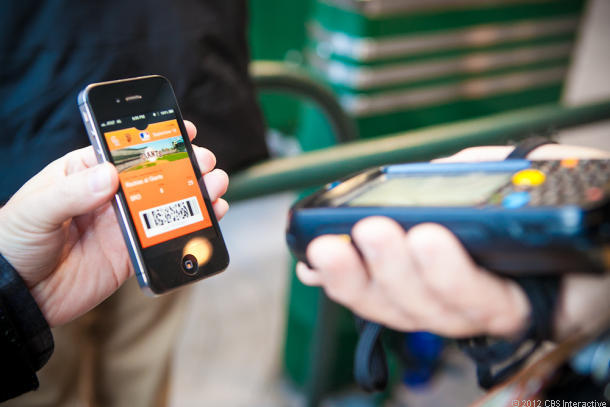 With the first batch of companies just rolling out integration with the feature, we’re getting the first taste of just how well it works in the wild.

Tonight that’s a baseball game here at AT&T Park, where the San Francisco Giants face off against the Colorado Rockies, a game we got into using Apple’s newly released wallet technology.

Passbook, which went out today inside of iOS 6, is a new application from Apple designed to store membership cards, tickets, coupons, and boarding passes — a bit like a digital wallet. As an added feature, Passbook does a few things paper and plastic can’t, like alert you to changes, and pop up to be readily accessed based on your location.

For something like a baseball game, all this means is that you don’t need to worry about keeping track of a ticket — just your phone. In practice, this involved me simply clicking an “add to Passbook” link from the ticket confirmation page that was sent to my e-mail inbox.

Unlike near-field communications (NFC), a technology that involves location-aware sensors and has become a staple on Android devices, Passbook relies on the places you’re at to scan your iPhone’s screen. At the game this evening, the security that let us in scanned my iPhone just like they would a normal ticket, and we moved on through.

The Giants are one of four teams in the league to make use of Passbook, along with the Boston Red Sox, Kansas City Royals, and New York Mets. The Giants were already doing digital ticketing as part of a pilot with ticket seller StubHub. Other companies with launch day Passbook integration include make-up retail store Sephora, StubHub, Fandango, and others.

As it turns out, the process here wasn’t entirely paperless. In order to give Passbook users some sort of proof of purchase, the stadium prints out a paper receipt that you need to hold on to. This is also in place to give those who might have a ticket with extra money on it for buying snacks a way to pay for those things later on in their stay. The stadium also requires those with higher level tickets, to somewhere like the suite levels, to carry an extra paper ticket. But again, this is just the start.

Global Processing Services is one of the largest ISO’s in the United States, let us help you accept credit cards today.